The region of Konkan covers a thin, coastal strip on India’s west coast. Though Konkani cuisine has its own, distinct identity, it has been largely influenced by the cuisines of Goa and Maharashtra in terms of cooking techniques, ingredients used and dishes created.

Seafood is a staple of Konkani cuisine, given the region’s coastal location. Another key ingredient is coconut, which is used in all its forms – dried, grated, fried, as milk and as a paste. Coconut is often added to dishes to counterbalance intense, spicy flavours; Konkani cuisine is notoriously spicy and cooks rely heavily on dried, red chillies.

Along with red chillies, other fragrant spices used include cumin, coriander seeds, ginger, cardamom, garlic and peppercorns. Fruit is also used in abundance in Konkani cooking and is added to many savoury dishes as well as sweet dishes. 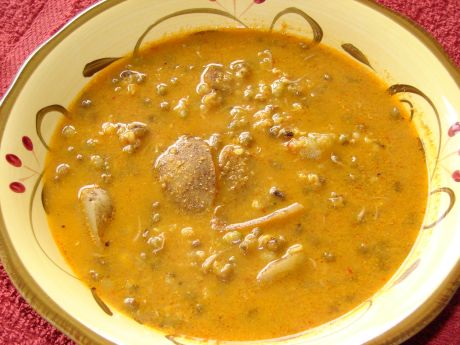 The Konkan region boasts many specialities, one of which being Kombi Vade. Originating from Malvan, this is a traditional chicken curry made using the meat and bones of the chicken. Vade – a fluffy, fried bread similar to Puri – is served with the chicken and often accompanied by a wedge of lemon and raw onion. Kombi Vade is often enjoyed with a cup of Solkadhi, which is a refreshing curry drink made from Kokum and coconut milk.

A favourite fish dish of the region is Bangda Fry. This dish is made using Bangda (which means ‘mackerel’ in Marathi); a common fish found in local waters. To prepare the dish, the mackerel is washed and then marinated in red chilli powder, ginger, turmeric, ginger and salt. Once the flavours have infused the fish, it is deep-fried until crisp and golden brown on both sides. Bangda Fry is most commonly served with rice and Dal.

Mori Chi Aamti is a fish curry synonymous with the Konkan region and is made using chunks of shark meat. Pomfret is another favourite fish and is the main ingredient of Paplet Saar, a Malvani-style curry served with steamed rice.

While meat and fish-based meals make up a large part of Konkani cuisine, there are also a number of staple vegetarian dishes. Arguably one of the tastiest dishes is Phanasachi Bhaji, which is a dry, jackfruit curry. Young, green jackfruits are used to make this dish, as ripened jackfruits are often enjoyed on their own as a fruit. The green jackfruit is boiled down and mashed before being added to a pan and sautéed with ingredients such as onion, garlic and a number of spices. Many of the locals consider jackfruit to be an ideal replacement for meat.

Along with savoury dishes, people of the Konkan region are extremely fond of cakes and breads. A cucumber cake, known as Dhondas, is a staple sweet of Konkan. It is prepared by baking a cucumber and then mixing it into a batter along with jaggery. Ghavan, a thin pancake with a web-like appearance, is another favourite sweet and is enjoyed throughout the region.

To sample dishes equally as mouth-watering as these, book yourself a table at one of London’s fine Indian restaurants.